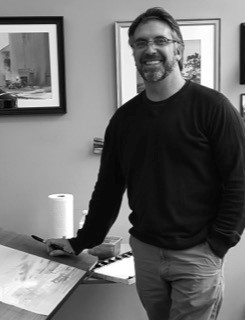 Andy began painting watercolors in the mid 1990s as a change of pace from his career as a medical illustrator. His work gained recognition after winning an international watercolor competition through American Artist magazine, appearing on their cover in 2005.  He’s been featured in numerous other publications since, and has become a sought-after workshop instructor who paints and teaches internationally.  He became a signature member of the prestigious Plein Air Painters of America (PAPA) in 2012 and served as their President from 2015-2017.

His paintings have won numerous awards, including the Bronze and High Winds Medals from the American Watercolor Society.

His love of painting on location also led to him being a featured presenter at the 2014 and 2016 Plein Air Conventions and inclusion in the 2017 Qingdao International Masters Watercolor Plein Air Event.

You can view his work at www.EvansenArtStudio.com.